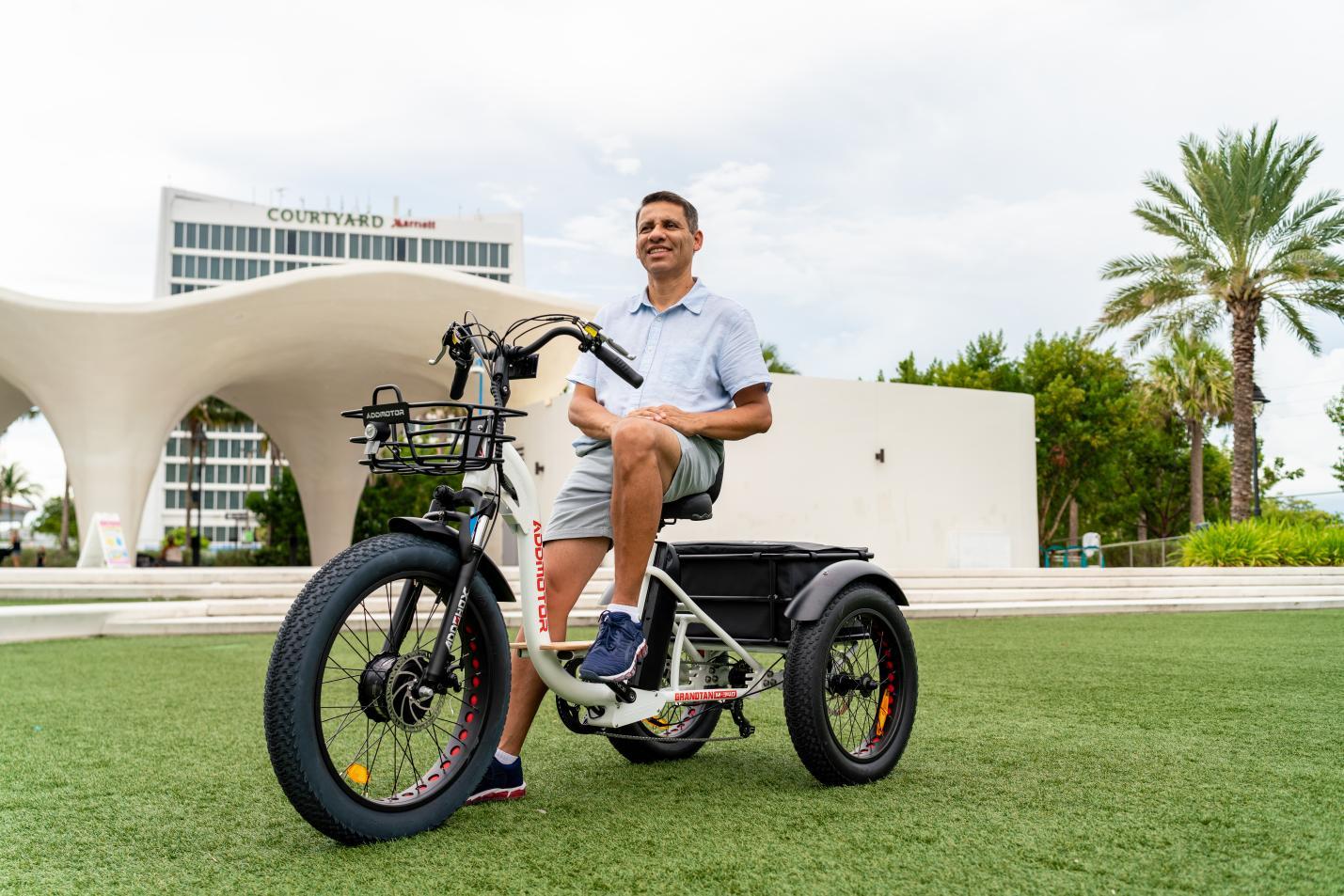 The expression "no emissions" is not exaggerated here. Three-wheel bike with motor works with battery. It does not have any exhaust pipe or gas tank. Therefore, it does not emit any harmful substances into the atmosphere when in use.

Though noise is not the most evident environmental issue, electric tricycles can help to reduce the amount of noise pollution in our cities and neighborhoods.

Electric tricycles don't need gasoline or diesel fuel to run – they are powered by batteries. The energy stored in the battery is sufficient for an average trip of up to 25-30km, depending on the speed and the terrain.

So, as electric tricycles don't need to be refueled, they can help reduce our dependence on fossil fuels and contribute to reducing fuel consumption by a significant amount. Especially with the advancement of rechargeable batteries, electric tricycles can be very useful in many areas.

Heavy transports damage the roads in many ways. They can cause potholes, cracks, and uneven surfaces due to the weight of all vehicles on the road. As a result, governments have to invest a lot of money and resources in road repair. This leads to more use of natural resources and the resulting pollution.

Any given 7-speed three-wheel bike is much lighter than traditional cars, so it will cause less road damage over time. This could result in governments spending less money on road repairs and therefore reducing their environmental footprint.

Benefit 5: Use of Sustainable Energy

The solar energy that is often used to recharge electric tricycles does not create emissions and can, in turn, be considered to be a much more sustainable form of energy. In addition, with the development of affordable solar panels and other renewable energy sources, it is easier for people to use clean and renewable forms of energy rather than relying on fossil fuels.

This helps the environment in many ways, but most importantly, by reducing the amount of carbon dioxide and other harmful gases being released into the atmosphere.

Benefit 6: Less Conventional Vehicles in Use

Trike 3-wheelers save the environment by reducing the number of conventional vehicles in use. The fewer cars on the roads, the fewer emissions are created, and this can have a positive effect on air quality.

When people have no alternative choice, they consume cars as one of the most convenient options for transportation. Electric three-wheelers are one of the best solutions as they offer an economical, convenient and environmentally friendly alternative to traditional cars. Electric tricycles can help reduce the number of cars on the roads by giving people a better choice.

During the pandemic, measures like social distancing are encouraged to reduce the spread of infection. You can travel without worrying about crowds and crowded public transport with electric tricycles. This makes it easier for people to avoid contact with other people and thus reducing their risk of getting infected.

Moreover, these tricycles can be used for grocery shopping, so people don't have to worry about going out and being exposed to the virus.

If you are concerned about your carbon footprint or are just looking for an easier, more enjoyable way to get around, electric tricycles can be a great choice. These three-wheeled bikes offer many benefits, including improved safety, better roads, sustainable energy use, fewer conventional vehicles on the streets and even fewer risks during the pandemic.

Categories: Lifestyle
Tags: Batteries, Cars, energy, Environment
Samantha Williams
My name is Samantha Williams and i am a professional blogger.I have searched out different niches and brought up with amazing results. My posts are on famous blogs like f95zoneus.net& forbestimesonly.com. Contact me via e-mail- contactviralnews24x7@gmail.com